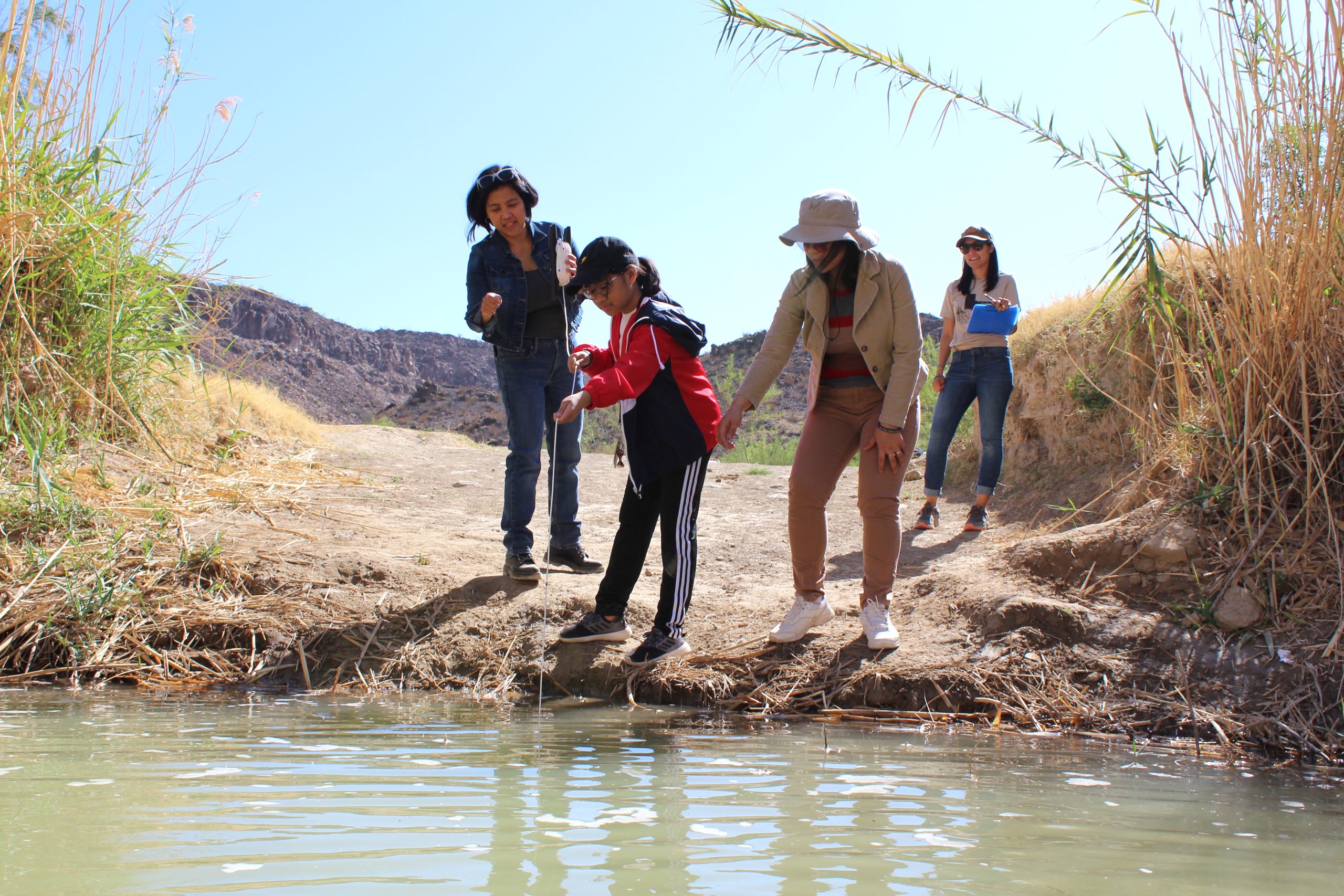 From left to right: Belinda Dolino, Clinette Garzon, Danica Romanban, and Elvira Hermosillo test the depth and clarity of the river at the mouth of Colorado Canyon in Big Bend Ranch State Park. Staff photo by Sam Karas.
Subscribe

BIG BEND RANCH STATE PARK — With a sample of murky Río Grande water taken from a bucket, Lucy Rede Franco Middle School seventh grader Clinette Garzon started the test. The steps were long and detailed, and the whole process took over half an hour. Presidio ISD teachers Belinda Dolino and Danica Romanban stood by her side, helping her make sure the results were consistent.

All their lab equipment was set up on a small camp table in the parking lot of the boat ramp for Colorado Canyon, about 30 miles from Presidio in Big Bend Ranch State Park. Dust swirled in the air as the occasional curious spring break tourist drove by. A few yards away, a small riffle in the river provided a calm soundtrack for the morning’s activities.

First, Clinette added a few drops from a vial of manganese sulfate solution, and turned the bottle over in her hands a few times. She repeated the routine with potassium iodide and sulfuric acid until the river water appeared to turn orange. This process “fixed” the sample — in other words, chemically freezing the water in time so if Clinette’s testing was delayed, her results would still reflect conditions on the river.

Clinette, Dolino and Romanban are three of thousands of Texans trained by the Texas Stream Team as citizen scientists helping the state monitor the quality of its waterways. The test for dissolved oxygen is the longest in the battery, but Clinette and Romanban achieved identical results. Their reading of 5.3 mg/L could be considered on the lower end for a major American river, but consistent with U.S. Geological Service gauge readings for the Rio Grande downstream in Big Bend National Park.

Dissolved oxygen is one of a few indicators that can help scientists determine the health of a river. “Do you know why oxygen is important in the river?” Dolino asked Clinette.

Dolino, Romanban, and Big Bend Conservation Alliance program coordinator Elvira Hermosillo are still building out the interpretation side of the curriculum — teaching students how to figure out what their results mean. The four citizen scientists discussed how dissolved oxygen is higher in the river in the morning, and drops as the river heats up in the afternoon.

When the river is low and slow — as it has been for months — the dissolved oxygen count is lower, and that can affect aquatic life. Drops in the dissolved oxygen can result in fish kills — sudden mass death of the local fish population. Numerous species have already gone extinct from the Rio Grande, and more are threatened. The distinctive Big Bend slider — a turtle species more often heard plopping into the river than seen — is only adapted for swiftwater conditions, and may go extinct if average dissolved oxygen levels don’t rise.

Clinette is one of a class of four middle school students helping relaunch the Presidio River Rangers program, a brainchild of the late naturalist and Presidio ISD teacher Patt Sims. While the program was still active, it produced some of Presidio ISD’s brightest graduates, including scientist Cynthia Wright, who attended an early River Rangers meeting via Zoom to offer her wisdom on growing up in Presidio and going to college.

Dolino — a Presidio ISD STEM teacher who now focuses on special education — got involved with the program in order to help grow the middle school’s extracurricular offerings. “After COVID, it seemed like the kids need it now more than ever,” she said.

Presidio ISD has a national reputation for its success in STEM extracurriculars like rocketry, but the River Rangers program gives the kids a chance to explore the natural world. “Our environment is part of the curriculum, but it’s all theories, it’s all just talking about it,” Dolino said. “Students will ask me questions in the lab like, ‘When are we going to use this?’ I thought: let’s bring the classroom outside.”

To cap off the day’s experiments, Clinette, Romanban and Dolino worked together to lower a black-and-white striped disc into the water to measure its depth, during which they discussed the smell of the water and how many bubbles were present on its surface.

“There’s bubbles in the river at home in the Philippines, but it’s because that’s where everyone does their laundry,” Dolino joked.

The Stream Team battery includes chemistry tests that monitor qualities like dissolved oxygen and the pH of the water, but the qualitative tests encourage the students to closely observe the world around them. “I would say 99 percent of our kids who get involved with rocketry, robotics, River Rangers — they always do well after high school,” she continued. “They get accepted to big universities, and they get scholarships. They don’t always know what they want to be, but at least we help them decide along the way.”

The Presidio River Rangers will repeat each test once a month on a Saturday and record the data. Next month, they’ll test closer to home at the International Water and Boundary Commission gauge along Alamito Creek.

In her negotiations with the International Boundary and Water Commission (IBWC) to access the testing site, Big Bend Conservation Alliance Program Coordinator Elvira Hermosillo was told to instruct the students to wear protective clothing and bring plenty of water. Rising summer temperatures won’t be the biggest threat the River Rangers face next month. “They did also tell me there’s a llama there that’s kind of mean,” she said.

After their tests, their families will be invited to join for a picnic. The community aspect of the River Rangers program is intrinsic to helping them spread the word and get Presidio families out to enjoy the natural splendor of their own backyard.

“We want them to see how important the river is,” Dolino explained. “We want to pass it on, and then hopefully we can start something.”