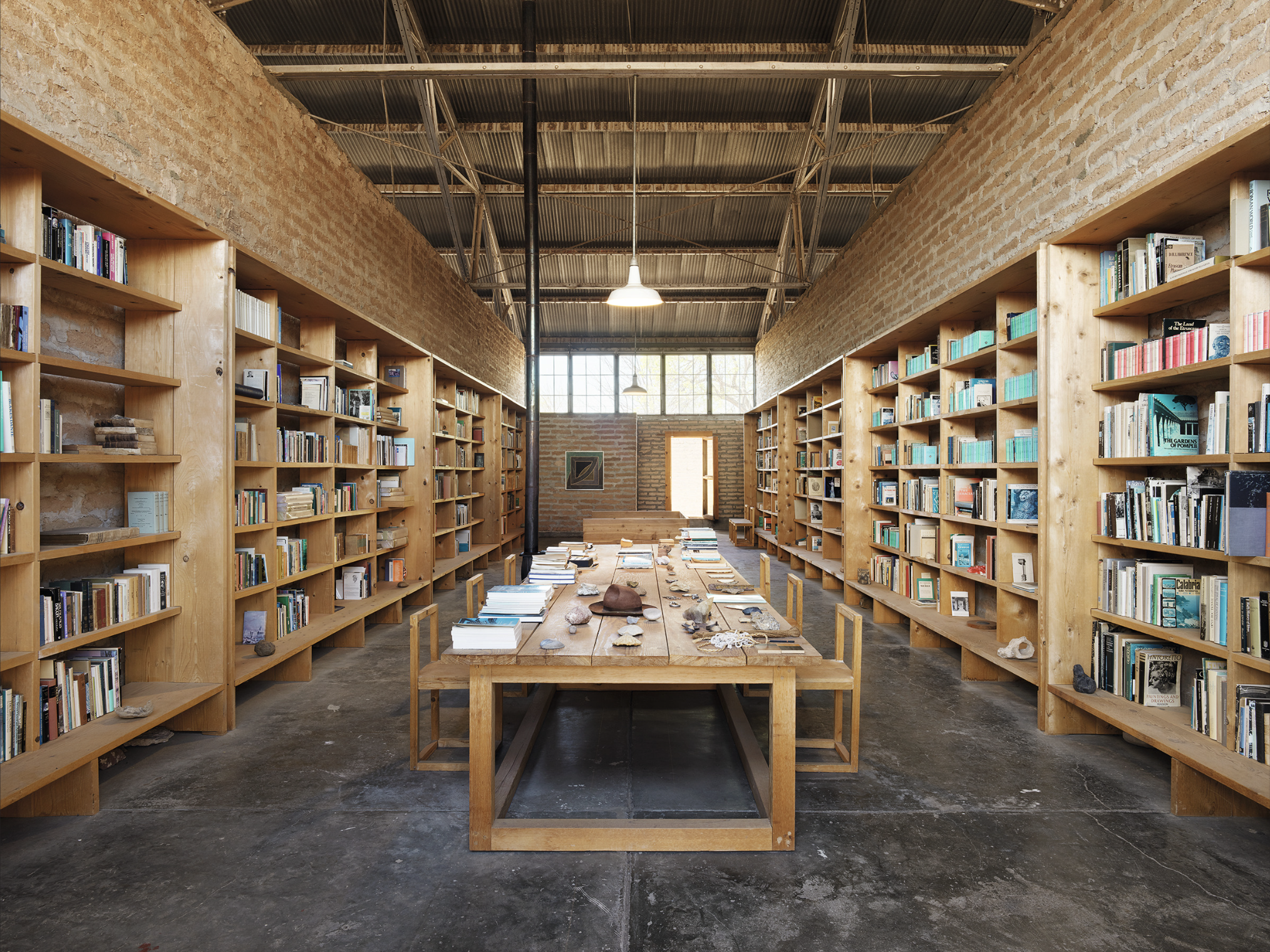 An interior shot of one of the libraries at the Block. Photo by Matthew Millman, courtesy of Judd Foundation.
Subscribe

MARFA — Last week, the Thoma Foundation, a private family foundation based in Chicago and Santa Fe, announced a $60,000 grant toward digitizing the private library of Donald Judd. The project will create a way for Judd scholars and book lovers around the world to view the library’s shelves online — a previous iteration of the virtual library relied on software that no longer exists.

Though the late artist’s books are scattered throughout his residences in New York and Presidio County, the largest single collection is located at La Mansana de Chinati, or “the Block,” a walled complex that takes up a city block across from the old Godbold Feed building. The Judd Foundation oversees maintenance and preservation at the Block, including the property’s private library of over 13,000 volumes.

Daily tours of Judd’s home in Marfa allow visitors to get close to some of the titles, but not all of the shelves are available to view — and a strict “no touching” policy prevents bibliophiles from flipping through the pages. The foundation has tried to strike a balance between preserving the physical copies of these texts and being able to share their content with the public. With both goals in mind, the new online library will launch in spring of 2023.

Judd’s extensive library isn’t focused on rare book collecting so much as it keeps a record of the artist’s interests: in his library, leather-bound books on Icelandic sagas live in harmony with books on the architecture of Russian churches. There are books on artists in his collection, like Kazimir Malevich and Josef Albers, as well as more unexpected influences like Japanese ukiyo-e woodblocks and Mibres pottery. World classics in many different languages — the majority of which he couldn’t read — serve as a record of Judd’s travels.

The late artist was also very interested in the hard sciences and the more esoteric branches of mathematics. “One section of books that I find particularly interesting are his books on astronomy, and in particular the dozens of copies of Star Date magazine,” said Caitlin Murray, Judd Foundation’s archivist and the lead on this project. “These volumes gave me a better understanding of how interested Judd was in new advances in astronomy and the research being conducted by our neighbors at the McDonald Observatory.”

Another special area of interest for Judd was in the natural world and history of the Chihuahuan Desert, with a heavy emphasis on Indigenous cultures and art. “Seeing these books reminds me of the response Judd gave to an interviewer from Holland in 1993 who asked him why he moved to the middle of nowhere,” Murray recalled. “Judd responded, ‘To me, it’s not the middle of nowhere; as I said, it’s the center of the world.’”

Murray has been working on this project for over a decade. She and her team extensively photographed the shelves and the covers of each book, and then connected the books online to World Catalogue, which allows users to find the nearest lendable copy of each entry. “It was a wonderful experience to sit in the library for a year and spend time with each of the volumes,” Murray remembered. “It was also great to explore world history from a table in Marfa, which I think is one of the real powers of an excellent library.”

Photographing each shelf allows virtual visitors from all over the world to experience Judd’s unique way of shelving — the library isn’t arranged in alphabetical order by author. The texts are split by date, with everything before the year 1900 in one room, and everything after in another. The texts are roughly sorted by geographic area and then by topic — there are many exceptions to these rules, as Judd liked to pair topics or texts by his own interior logic or research interests.

Immersion in the library, both from a holistic perspective and by browsing each individual title, allows art lovers a better understanding of Judd’s life and work.  “Don’s library provides a deeper understanding of his work and the lens through which he viewed the world,” Judd’s daughter, Rainer, wrote in a press release. “Through this generous support, we are able to again share this treasured resource.”