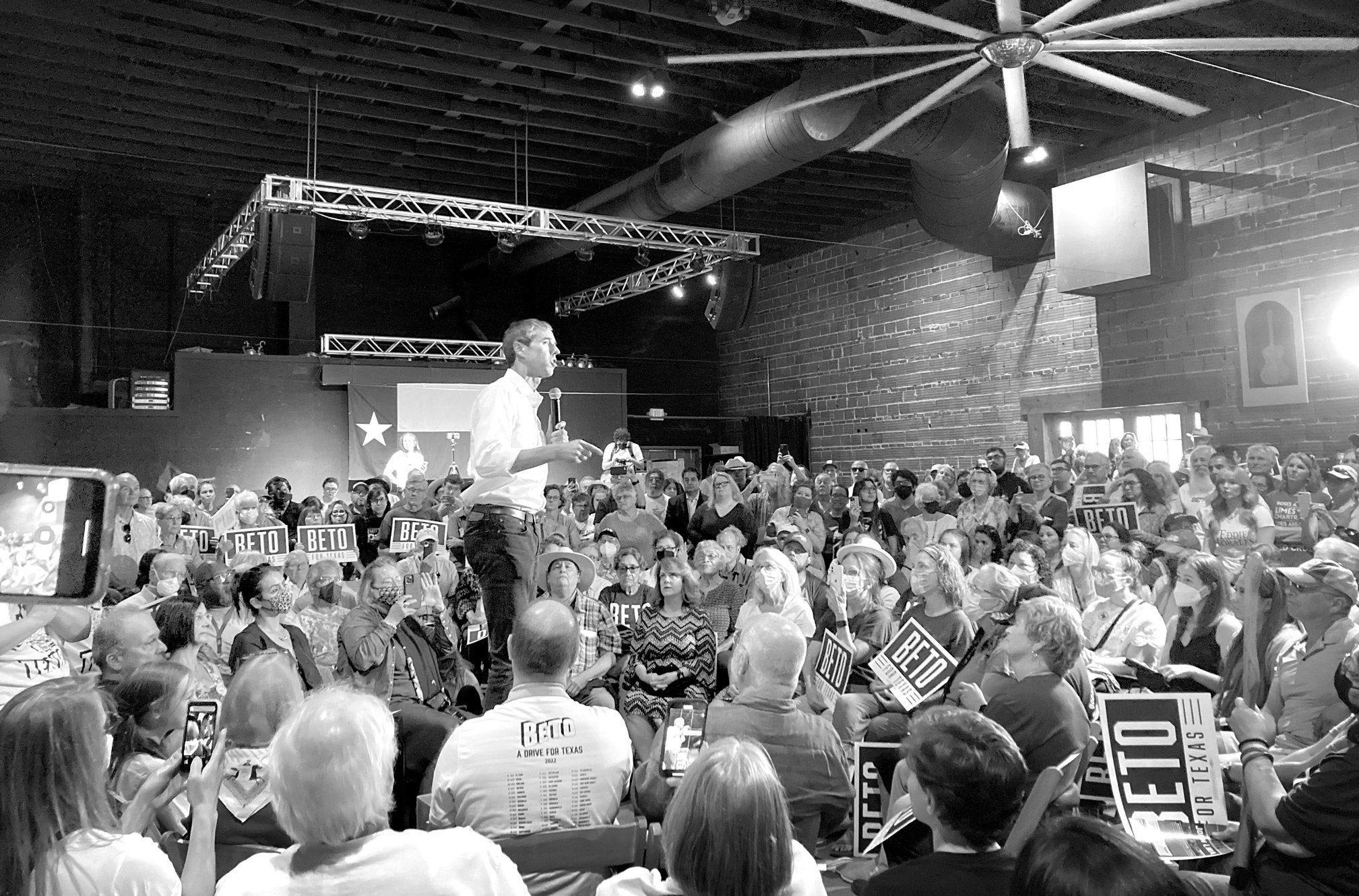 Democratic gubernatorial candidate Beto O’Rourke addressed a crowd of over 600 at a campaign stop in Alpine. Staff photo by Allegra Hobbs.
Subscribe

ALPINE — On Sunday afternoon, Beto O’Rourke stood before a crowd of over 600 inside Alpine’s Granada Theatre and told enthusiastic attendees that he would be the next governor of Texas. The victory was assured, he said, by a platform that included the championing of reproductive rights and the reformation of permissive gun laws. But beyond policy proposals, O’Rourke came armed with a message of unity, collegiality, and the seeking of common ground that cynical actors had worked to upset.

“In their Texas, it is you or it is me. In our Texas, it’s going to be you and me, all of us together, working for, by, and with one another,” said O’Rourke. Then there was the matter of his opponent, the Republican incumbent, whose record has been lambasted by the Democratic hopeful throughout his campaign.

“We’re going to win because we are running against arguably the worst governor in the United States of America, Greg Abbott.”

Brewster County went for Abbott in the 2018 gubernatorial election, but by a slim margin — fewer than three percentage points gave him an edge over his Democratic opponent. Statewide and national races tend to be that close in the purple county, where local offices are often held by Democrats. In any case, in a statewide election, whether or not O’Rourke takes the county is beside the point — local Democrats are more concerned with adding to the overall number of ballots cast statewide for their candidate.

Mary Bell Lockhart, chair of the Brewster County chapter of the Texas Democratic Party, was present at Sunday’s rally and left hopeful about their chances this November. She maintains that the voters are there — it’s just a matter of spurring them into action. “Brewster County has more Democrats than Republicans in it, but not as many of ours are faithful voters, so that’s what we want to change this go around,” she explained.

Lockhart also estimated that the political landscape in the region had “changed dramatically across the summer” — in large part due to the Republican Party’s extreme stance on abortion. Not only is abortion banned in the state, even in cases of rape or incest — a position the majority of Texans do not hold, polling shows — due to a “trigger law” that took effect after the fall of Roe v. Wade, it is now a felony to perform an abortion in the state.

O’Rourke came ready to capitalize on the unpopularity of the policy — right out of the gate, he pledged to fight for “every woman to make her own decisions about her own body, her own future and her own healthcare.”

It was among several promises he made to the people of Brewster County. Noting that the average public school educator in the county is paid $17,500 less than the national average, he promised to help close that gap. “When we win this and when I’m your governor, we’re paying every teacher in Brewster County enough to just work one job,” he said. He also pledged to do away with the state’s STAAR test, a standardized test he said teachers had informed him was ill-equipped to evaluate a student’s potential.

He also promised to set up a registry connecting veterans with the healthcare they need and spoke of his intention to ensure no veteran goes unhoused. Marijuana will be legalized under his purview, he said, and the records of those arrested for its possession will be expunged. He pledged to weatherize and winterize the grid to prevent the catastrophic blackout of 2021 from recurring, and further pledged to connect ERCOT to the national grid for access to its electricity in a pinch. Finally, he said that he intends to take the gas companies that profited off the blackout to court and return the $11 billion they reaped to the people of Texas.

Where the candidate shone, said Lockhart, was in his attention to the matter of rural healthcare, or lack thereof. O’Rourke acknowledged the dearth of options in the remote Big Bend region and said he planned to expand Medicaid to the tune of $10 billion, and would work to revive grow-your-own programs to bring more healthcare providers back into the communities they hail from.

On the matter of gun control, O’Rourke stopped short of calling for a ban on assault weapons, as he has in the past. He decried the permitless carry law Abbott signed off on last year, and called for “find[ing] some common ground to get back to the responsible tradition” of gun ownership in Texas. He advocated raising the legal age to purchase a firearm from 18 to 21, the implementation of red flag laws that would allow law enforcement to take guns away from a person believed to be a danger, and for universal background checks.

“We should admit that there’s nothing that we can come up with that would prevent every instance of gun violence, but we should also acknowledge that that should not stop us from doing what we can to defend the Second Amendment and protect more lives of those in our lives,” he said.

The remaining elephant in the room, the border, was addressed at the end of O’Rourke’s speech, in which he spoke of the need to create a viable legal path for migrants coming into the U.S.

In a subsequent interview with The Big Bend Sentinel, when asked what would become of the Operation Lonestar program — Governor Abbott’s initiative to send resources and troops to border counties — O’Rourke said he would halt the state’s operations he characterized as “stunts.”

“I would focus on the solutions that we’re all looking for instead of the stunts, the publicity, the extremism that has been the hallmark of Greg Abbott’s approach to the border,” he said. “As governor, there will be no more bussing of migrants indiscriminately to Chicago, New York and Washington D.C., spending all this money to build a few miles of border wall, or involuntarily activating 10,000 members of the guard,” he said. “None of these things have made us any safer or improved conditions at the border, or addressed the root causes of the challenges that we face right now.

What I will focus on as governor is a safe, legal, orderly path for people who want to come here to work, come here to join family, or come here to seek asylum,” he continued. That means making the process of seeking asylum easier.

“If you’re seeking asylum, today you’re waiting six years for the adjudication of your claim,” he said. “How about six weeks?”

When asked by The Sentinel to weigh in on a matter of local concern — the stagnating construction on the Presidio International Bridge — O’Rourke said he was willing to expedite that process.

“The fact that we’ve been waiting so long for the Presidio-Ojinaga — the rail line, the economic trade and even just the ability to move people, opportunities that that presents — is an indictment on this state,” he said. He further advocated devoting some of the $8 billion of TxDOT’s excess budget to infrastructure in Presidio County and Brewster County.

Lockhart said her chapter had received more assistance from the Texas Democratic Party this election cycle in their quest to win over rural voters. The party has supplied them with a database of voters so they know who to contact — who they can most likely sway to vote blue this November, that is — plus tips on talking points and yard signs. Over the next month, her group will be making phone calls and going door-to-door to get out the vote. They will also work to help elderly residents vote by mail.

But part of Lockhart’s ideal strategy has already come to fruition. “I said, ‘Listen, I’ll get down on my knees and beg Beto to come to the Big Bend area,’ because I knew what would happen if he did,” she said. “So many people were just asking for him to come, and I was about to do that, then I get this email from his campaign saying Beto’s coming to Alpine in September. I didn’t even have to get down and beg.

“Because that’s exactly what we needed,” she said. “Someone to come down to this area and say that he cares about us.”