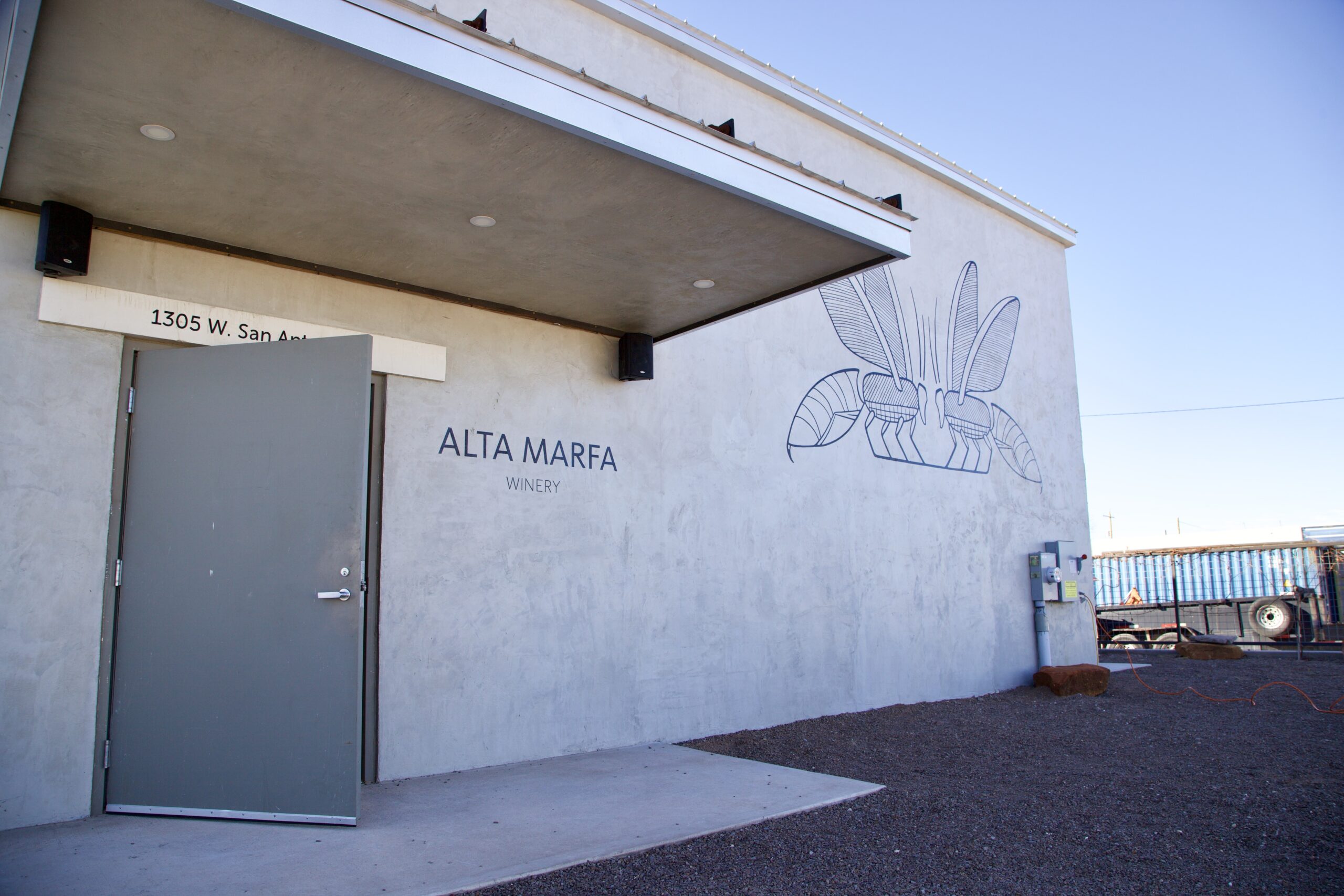 Katie Jablonski, co-founder of local Alta Marfa Winery, which will open its new tasting room later this month, in their space next to a bright yellow grape press from the 1950s. Photo by Mary Cantrell.
Subscribe

MARFA — Alta Marfa, a local winery operating a 30-acre vineyard in the Davis Mountains, is opening the doors to its new tasting room in Marfa next week on Friday, January 20.

The space, an industrial gray structure located on the west side of town just across the street from The Water Stop, is demarcated by the winery’s logo, hieroglyphs of two opposing bees. The public will be welcome to the shop Fridays from 3 to 7 p.m. and Saturdays from noon to 7 p.m. starting January 20.

The 1,500-square-foot tasting room also doubles as Alta Marfa’s production facility, allowing visitors to taste the wines in the space in which they were made. The newly-constructed building features an angled roof, large garage door, high ceilings, and stacked stainless steel and oak barrels for wine storage. The oak barrels are used and have been sourced from a variety of places including Texas, France and Austria by Alta Marfa’s owners, Ricky Taylor and Katie Jablonski. 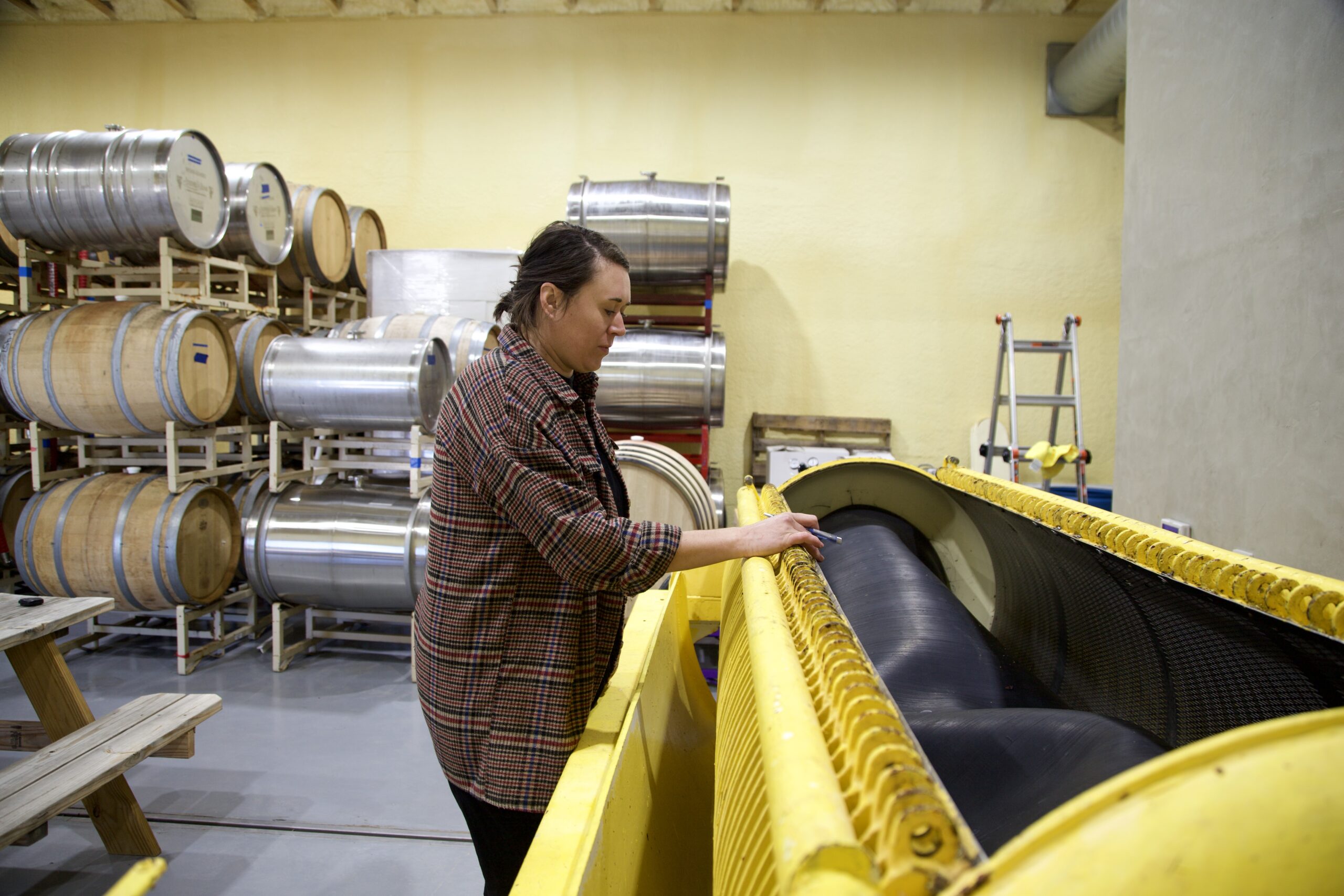 Katie Jablonski, co-founder of local Alta Marfa Winery, which will open its new tasting room later this month, in their space next to a bright yellow grape press from the 1950s. Photo by Mary Cantrell.

Wooden picnic tables occupy the center of the room and dot the gravel lot outside. The structure was built to fit Alta Marfa’s needs by their landlord, who Taylor was connected with after a chance posting on Marfalist.

Alta Marfa wines — which Taylor and Jablonski consider highly-drinkable, natural wines that pair well with a variety of foods — will be offered by the glass and by the bottle at the new tasting room. Non-alcoholic options, sourced from Texas, like kombucha and other botanical beverages, will also be available, as will snacks such as cheeses, crackers, olives and tinned fish. Bottles will also be offered to go.

Food pop ups will be another feature of Alta Marfa’s new space, beginning with Chef Dylan McShan of Easy Wind Catering on opening weekend and followed by Hot Beef by Chris King the following weekend. Jablonski and Taylor said their goal is to offer food most Saturdays, providing more lunch options for the community, and to share their space and customers with local cooks.

Alta Marfa will offer affordable by-the-glass options and local discounts. Taylor, who will be working open hours along with Jablonski, said they want the space to be accessible for locals who might not know a lot about drinking wine or the winemaking process and may or may not want to learn more.

“It’s not a high stakes situation. You can come and just drink and have a good time and sit out in the sun and not feel like you need to think about it and learn because it costs so much money,” said Taylor. “Or, we are here, and we’re the ones who know all the answers to any questions you have. We’re very happy to bring people along for the ride, but we also want to have an environment that doesn’t make you feel like you need to do that.”

Taylor and Jablonski are part of a new wave of vintners establishing vineyards and producing wine in the Davis Mountains, specifically the Blue Mountain area, one of eight designated American Viticultural Areas (AVAs), or grape growing regions, in Texas.

They bought the land for their vineyard in 2016 and have since been experimenting with growing grapes both there and at their home in Mano Prieto. The couple’s original goal was to produce grapes, but they transitioned into also making wine and eventually decided to open a business in the area.

“The vineyard was picked in this spot because it’s the coolest weather in Texas, because of the high altitude and the desert. We thought this would be the best place to grow grapes,” said Jablonski. “Marfa then was kind of an accident after that. It is close to where our vineyard is and it’s a cool community that does have a lot of tourists and interesting people, so it’s a nice place to try and open a business.”

Alta Marfa wines are currently made from grapes sourced from Chateau Wright, which is also located in the Davis Mountains, the Texas Hill Country and New Mexico. Taylor said they are working up to using the grapes grown on their vineyard to make their wine, but will continue to source grapes from other grape growers for the foreseeable future.

Alta Marfa’s production level is still very small-scale, said Taylor, but the couple ships all over the country and works with distributors in New York and Colorado. Now that they have their own full-time space to make wine, they are hoping to hone their focus, he said, transitioning away from the last two years in which they have made 16 wines each year.

“Now we’re finally getting to the point where we’ve learned a little bit. I think in the future, we’re going to try to focus more and pare it down a little bit,” said Taylor. “Like, let’s do less wines, but really focus on iterating and improving them.”

In 2022, Alta Marfa released a series of wines, three Tempranillos, based on different soil types around Texas — limestone, sandstone and volcanic — featuring grapes grown in those respective regions. Jablonski said the series was inspired by Texas’ growing recognition for its contributions to the wine industry.

“As Texas is a new emerging wine region, we definitely want you to be able to taste different parts of Texas in the wine,” said Jablonski.

wineries
Stay in touch with The Sentinel
Related