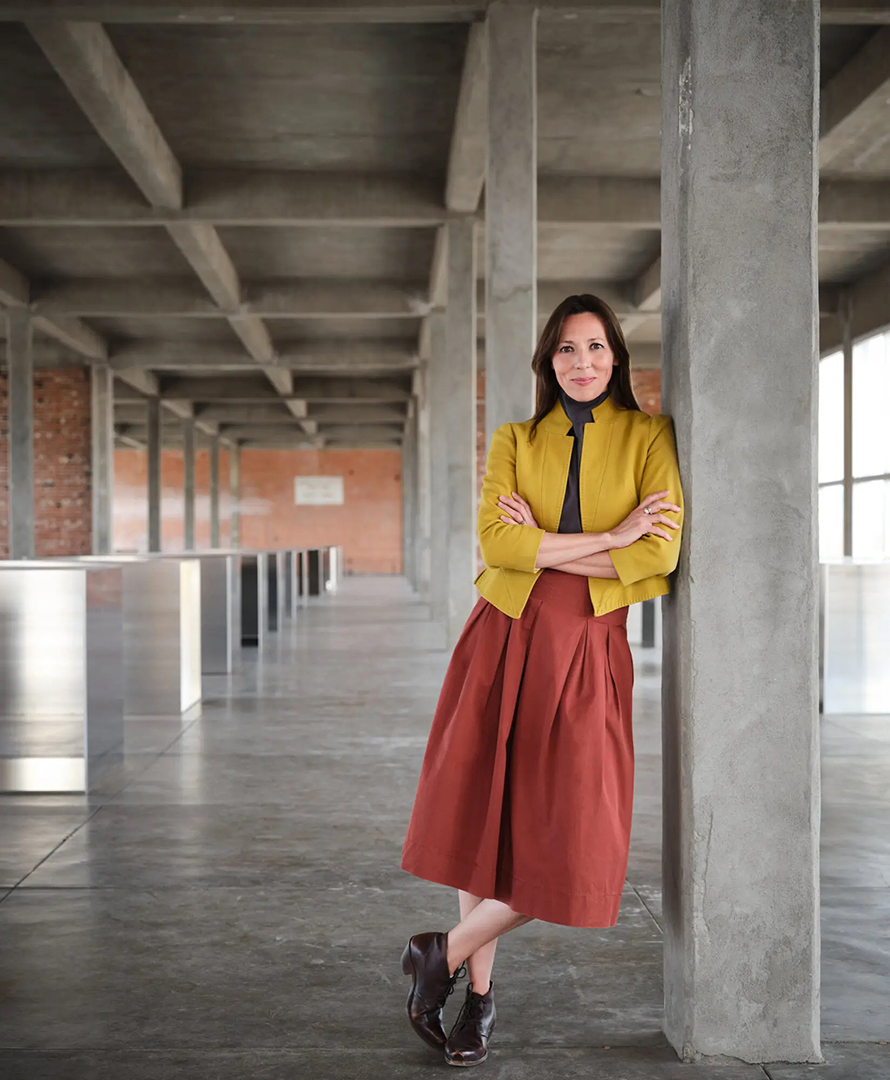 The Chinati Foundation announced last week Director Jenny Moore will step down from her role this July after leading the museum for nine years. Photo by Douglas Friedman.
Subscribe

MARFA — The Chinati Foundation announced last week its director, Jenny Moore, will exit her role as the museum’s top administrator at the end of the month after nearly a decade spent with the organization.

In an email interview with The Big Bend Sentinel, Moore said the separation has been an ongoing, collaborative effort between her and Chinati’s board of trustees, timed in conjunction with the museum’s strategic and master plans — documents which detail long-term visions and goals for the future of the organization.

“The board and I have been in discussion about succession planning since last year as part of the 2022-2024 strategic plan. With the first phase of the master plan complete, the timing was right for a transition of leadership,” said Moore.

Moore did not provide further information as to the nature of her departure from the museum. Marella Consolini, who served as Chinati’s chief operations officer from 2010 to 2014, has been tapped to serve as interim director. Moore will work closely with her temporary successor during the coming month to ensure a smooth transition, she said.

“Marella previously served as Chinati’s COO so she knows the organization well. Having her serve as the Interim Director as the Board launches a search for its next director will be beneficial to Chinati during this period of transition,” said Moore.

In a statement to The Big Bend Sentinel, Consolini, who has been working as managing director of Altour Arts & Culture, a travel management company in New York City, since leaving her role as COO of Chinati in 2014, said she was honored to serve as interim director and was happy to be back in Marfa.

“It’s very special to be among dear friends and colleagues again, and I look forward to meeting new ones. I will be working with the Board and staff to move the organization forward and find new ways for audiences to engage with the art, architecture, and land at Chinati,” wrote Consolini in a statement to The Big Bend Sentinel.

In addition to launching an international search for a new director to take Moore’s place, the museum is hiring for other key leadership roles, including a director of planning and preservation and director of development, both of which report to the museum director. The museum is also currently seeking individuals to serve in integral roles in the visitor services and accounting departments.

During her time as director, Moore oversaw the creation of a foundational multi-year Master Plan designed to ensure Chinati’s ongoing vitality in relation to its art collections as well as the 34 structures and 3,400 acres of land it manages. This spring the foundation completed the restoration of the John Chamberlain Building and accompanying Donald Judd-designed adobe wall enclosure as part of the 2017 Master Plan. The next priority, as identified by the plan, is the restoration of the two artillery sheds on Chinati grounds which house Judd’s 100 untitled works in mill aluminum, said Moore.

“I am proud of how Chinati has grown and evolved during my tenure. Working together with the board and staff on the development of the master plan has been a key part of my work over the past few years and the reopening of the John Chamberlain Building this past April is an important milestone for Chinati,” said Moore.

Other notable museum developments that took place under Moore’s leadership include the completion of a digital database for the foundation’s archives funded by the Mellon Foundation, creation of the large-scale, permanent installation titled untitled (dawn to dusk), a building and artwork designed by artist Robert Irwin, and the launching of an adobe internship for local women in the tri-county area funded by a #StartSmall grant.

“The master plan we put in place and the progress we have made on restoration programs and social justice initiatives help ensure that Chinati will continue as a beacon of creativity for decades to come, while also embracing the radical notion of what an artist-centric institution can and should be,” wrote Moore in a press release.

Over the past nine years, Moore has also led the museum through a number of changes and challenges, including increased visitorship — which swelled to 50,000 in pre-pandemic years from 11,300 in 2013 — a capital campaign to fund master plan projects, and the COVID-19 pandemic. In 2021, the Chinati Foundation’s decision not to renew the contract of Rob Weiner, who worked for a number of years as Judd’s assistant and later as associate director of the museum, led to public outcry, with a number of letters to the editor filling the opinion pages of The Big Bend Sentinel.

“Since her appointment in 2013, Moore has worked to professionalize Chinati as the organization transitioned from leadership with direct ties to founder Donald Judd to its next generation of stewards,” said the press release regarding personnel changeover.

This past May, the Chinati Foundation’s John Chamberlain, Ice Plant and Locker Plant buildings were listed on the National Register of Historic Places as part of the newly-designated Central Marfa Historic District, a project which began as a city-initiated effort in 2006 and was backed by the Judd and Chinati foundations throughout the years. Because the world-renowned arts foundation is situated in the small, rural town of Marfa and shares some of the city’s growing pains, Moore said it is important for the foundation’s leaders to keep the lines of communication open with the city.

“Many of the challenges for Marfa are also part of the challenges for Chinati — preservation of our historic spaces, providing a high quality of life for members of the community (and in the case of Chinati — also our staff), offering quality and authentic experiences for the increasing number of visitors. Both Marfa and Chinati benefit when the two are in close dialogue about mutual challenges and possible solutions,” said Moore.

Outside of her role as director at the Chinati Foundation, Moore and her family have been involved with a number of community initiatives. Moore has volunteered with the Marfa Education Foundation since 2016 and has served as the board president for several years. In 2015, in partnership with then Superintendent Andy Peters and Principal Oscar Aguero, she conceived Read Marfa, a program which brings volunteers into Marfa’s public school classrooms to promote a love of reading and improve literacy.

“We love Marfa — since our first extended time spent here in 2004. We’ve lived here full-time for close to a decade since I began as Chinati’s Director in 2013. We have raised our daughters here,” said Moore. “For now, we are planning to stay in Marfa.”